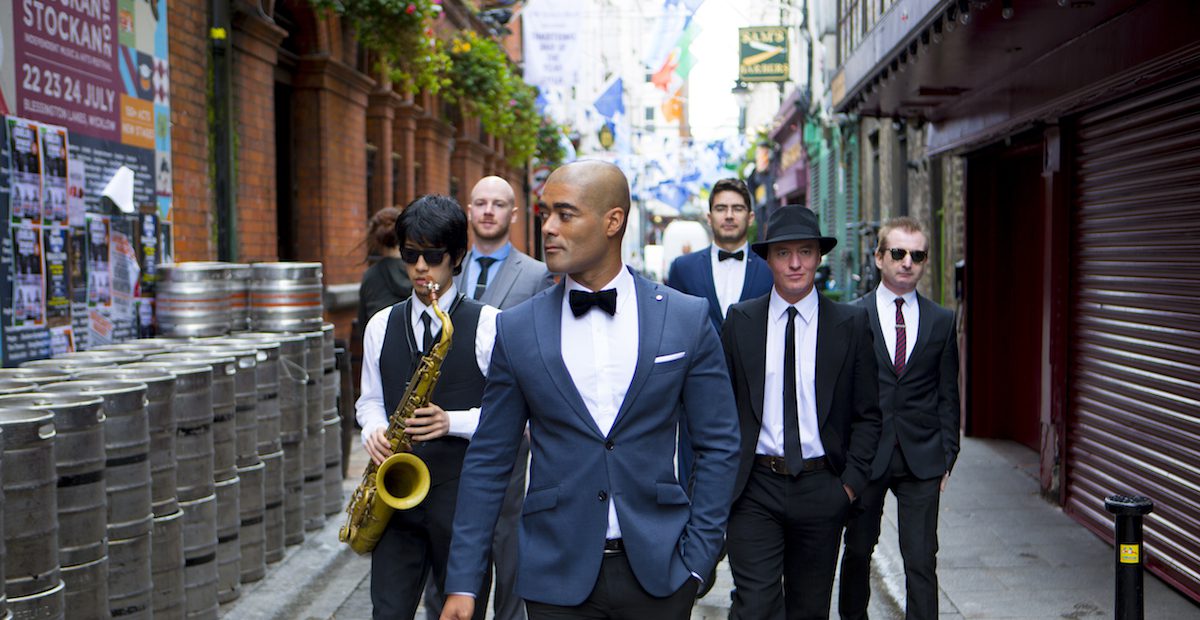 WOW, what a set up for tonight’s Aviation Awards at Clayton Hotel Burlington Road

We were honored to be asked to play at the 30th-anniversary celebrations of Television Company Tyrone Productions in the beautiful Smock Ally Theatre Dublin. We got to meet this legend of Jazz and Swing, the one and only Mr. Paddy Cole! What an absolute gentleman he is too. A host of stars turned out to celebrate the evening with founding members John McColgan and Moya Doherty.

We are Super Pumped to be headlining the Cork Jazz Festival this Sunday Oct 29th at The Metropole Hotel. The show is completely sold out and we cannot wait to hit the stage! For those of you who managed to get tickets we’ll see you there!! This will be the 3rd year in a row performing at the festival and it gets bigger and better every year. Jazz and swing fans from all over the world will ascend on Cork city this weekend in their thousands to experience what is widely expected to be the best one yet. There is a super lineup of some the finest jazz musicians to ever grace the stage and we’ll be right smack bang in the middle of it!

What an unbelievable night!

We can’t thank everyone enough for coming to our show in the Olympia Theatre last Friday, you helped make our dreams come through!

Special thanks to Al Porter, Samantha Mumba and Tom Cole Jr for joining us on the night, it was like a  show straight outta Vegas!!

Two weeks to go before we play the biggest show of our life!

Have you got your tickets yet? We promise that this one will be something special!
We will be joined on stage by none other than Samantha Mumba! along
with a Mr Tom Cole Jr and one other very special surprise guest! This show is not to be missed!

We’ve just been announced as CO-HEADLINERS along with Imelda May and Alison Moyet for this year’s Guinness Cork Jazz Festival!!

After SELLING OUT the National Concert Hall in May we are bringing our smash hit show “THE STORY OF SWING” to the iconic OLYMPIA THEATRE due to popular demand!!!

Our 3rd official performance! last Monday at Áras an Uachtaráin for President Higgins and his wife Sabina. A very proud moment for us as a band and to be performing for the 3rd year in a row is really something special.

A Great day was had yesterday at the CARI Charity lunch in The Shelbourne Hotel, hosted by the very hansome Alan Hughes!

The after show party in House on Lesson Street was perfect too!

The Swing Cats are coming this Mothers Day, March 26th. Europe’s No.1 swing band bring their distinctive and exciting sound to Number Twenty Two for the very first time. Get your tickets Here

Delighted to be invited to this event in aid of the charity CARI… We’ll be cooking up a storm in Number Twenty Two on March 9th along with winning streak’s Sinead Kennedy!!

A few tickets left for this event direct from the charity CARI.

“Turning on the Christmas lights on Grafton Street”

What an experience! After switching on the Christmas Lights, 20,000 people singing along at the top of Grafton Street… Absolutely Magic!!

The Garda had to shut it down directly after this song because people were having too much craic, we kid you not!

Getting into the festive spirit @ House on Leeson Street for the second year in a row for the independent.ie Christmas party!

800 people in attendance for last night’s Applegreen Charity Ball in The Double Tree Hilton… There’s no doubt that the good times are on the way back!!

Great event to be part of and great to see this talented broadcaster and singer Sile Seoige hosting the event!

Another SOLDOUT crowd for tonights show!!

Absolutely overwhelmed by the response to our live recording session invite…

We wish we could bring everyone who messaged us over the past few days along to our live studio recording but unfortunately it was simply the first 20 people!! To those lucky 20 we can’t wait to perform live with our orchestra for you!! See u Sunday.

Delighted to be asked to perform at The Hotel and Catering Gold Medal  Awards this year in The Lyrath Hotel Kilkenny.. Pictured here with The Master of Ceremonies herself Tracey Carney from Ashville Media..

An absolute pleasure to be asked to perform at President Higgins Garden party again this year at Áras an Uachtaráin.  We even got to watch the Ireland V France game with him!